I’ve always been a feminist, but it was not until the Brett Kavanaugh’s Supreme Court nomination battle that I felt how much our society hates women.

From the moment Justice Anthony Kennedy announced he was retiring, it was a brutal, uphill battle. Trump had promised to nominate only individuals who would overturn Roe v. Wade, and he was going to pick a nominee from a shortlist created by the Federalist Society and Heritage Foundations—staunchly conservative, anti-abortion organizations. And so my organization, the National Women’s Law Center, wrote reports. We delivered stories to the Senate. We rallied in front of the Supreme Court. We worked with partners in Maine to reach Republican Sen. Susan Collins.

But our voices were never really heard.

When the Intercept and the New Yorker reported that Kavanaugh sexually assaulted a woman, and we later learned that women was Dr. Christine Blasey Ford, my work at the National Women’s Law Center understandably intensified and took on an even deeper personal dimension. Blasey Ford’s story resonated with women across the country—because so many were either survivors or had narrowly escaped assault. At some point, many of us could have been that young, trusting girl—the one who was just going over to a friend’s house after swimming, only to be forever changed.

Most of us also likely remember those guys in high school and college—the bros who traveled in packs, egging each other on to do one stupid thing after another, usually at the expense of others, whether it be nerds, girls, or anyone who seemed different or weak.

We remember these guys because we were scared of them.

As I dived into lifting up Blasey Ford’s voice, I also realized there was a lot to do within the progressive movement. There was work to do in explaining that centering survivors meant respecting and supporting their wishes, even if we would have chosen differently ourselves. There was work to do in ensuring that her story was not accidentally erased in a zealous desire to highlight Kavanaugh’s bad actions.

This work involved too many difficult conversations, each one cutting deep into my soul. Thankfully, I was not the only voice in what became essentially a massive public teach-in. I had great allies on whom I leaned heavily for support. But this glimpse showed me how little has changed.

Perhaps because of this, I should not have been so devastated by the result. The Senate does not have a good track record; the treatment of Anita Hill is a lasting stain on the Senate  and will forever taint some politicians’ legacies. And, let’s be honest, racism also shadowed the Senate’s treatment of Professor Hill.

But I thought that this time, in the middle of #MeToo, a survivor would be heard and believed. Unfortunately, history repeated itself, and Dr. Blasey Ford’s testimony was belittled and questioned by white men looking to protect one of their own.

Republican Senators such as Chuck Grassley of Iowa and Lindsey Graham of South Carolina spent the majority of the hearing raging along with Kavanaugh. How dare a woman bring up a story from decades past to try and stop the ascendancy of this man? It mattered not that Kavanaugh and Mark Judge’s laughter at Blasey Ford’s expense was seared into her memory or that she was “100 percent” certain her attacker was Kavanaugh.

They accepted his testimony without question. And to add insult to injury, two other women-Debbie Rameriz and Julie Swetnik-did not even receive their own hearings.

In the face of this, we doubled down. We helped partners organize three demonstrations in one week. We helped state partners put ads in local papers. We hosted a good old-fashioned telethon to drive calls. We worked with partners to bring survivors from several states to advocate in the Senate. There was no way they could not hear us in the halls of Congress.

Their votes showed us that they did not care.

And so they erased her story, cast their vote and are now trying to rewrite history about who is the “true” victim.

At Kavanaugh’s White House swearing-in ceremony, Trump apologized to Kavanaugh for him and his family’s “pain and suffering” and failed to mention Dr. Blasey Ford or her lifelong trauma. And when recently questioned about his treatment of Dr. Blasey Ford and whether he thought she had lied, Trump said that “[i]t doesn’t matter. We won.”

The attempted erasure of Dr. Blasey Ford—not to mention Debbie Ramirez and Julie Swetnik—is perhaps all too familiar to many survivors. This, is painful, disheartening and demoralizing.

But what I am choosing now to think about are the survivors I met in this fight, the ones who bravely shared their stories, even in Senator Grassley’s office. I think about the strength and perseverance they have to not just carry on, but to try to make a difference. I think about how grateful they were for bringing them together, hearing them, and making them feel stronger.

And when I think about all of this, I feel just a little bit better, because we have tapped into our collective rage. This anger that women across the country feel—it is our power and it is our liberation.

(Anna Chu is Vice President of Strategy and Policy at the National Women’s Law Center and a public voices fellow of The OpEd Project.) There is a Devil

It’s a setup in many cartoons and films of days past: The protagonist is presented with a moral dilemma, and gets conflicting advice from... I’ve always been a feminist, but it was not until the Brett Kavanaugh's Supreme Court nomination battle that I felt how much our society... This week I visited over 130 registered voters living in 79 houses in Stone Mountain, Georgia.  My volunteer partner and I spent four hours canvassing,... Marriage At Sixteen, Or Younger 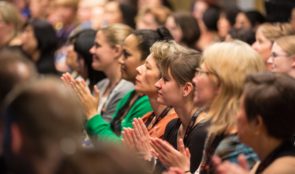 No, Susan B. Anthony Was Not Against Abortion

The Susan B. Anthony Birthplace Museum in Adams, Massachusetts tells the story of one of America's greatest suffragist—offering a self-guided tour that winds up in the... Shonda Rhimes, the creative force behind such hit as Grey’s Anatomy, Scandal and How to Get Away With Murder, is joining Planned Parenthood’s national board...
Load more