Nanette Carolyn Carter was born in Columbus, Ohio. She spent most of her childhood in Montclair, New Jersey where she took her first art classes at the Montclair Museum of Art at the age of six—the beginning of a lifelong career in the arts.

Carter attended Oberlin College in Oberlin, Ohio, where she majored in Studio Art and Art History before going abroad to study in Perugia, Italy in her junior year. After receiving her BA from Oberlin College, Carter studied at Pratt Institute of Art in Brooklyn, New York, and received her MFA. Presently she is a tenured Associate Adjunct Professor and Coordinator of Drawing in the undergraduate program at Pratt.

Carter says her recent works, titled “Cantilevered,” suggest a cultural paradigm for the 21st century. “The works are anchored at one end while balancing a structure that extends horizontally. This becomes a metaphor for the balancing act of responsibilities that we confront daily as we try to keep up with several jobs, family, social media, technology, the news, lovers and friends. More people are confronting sleepless nights, stress and a number of illnesses due to this dilemma. There is little time to be still, meditate or contemplate.”

Carter’s work is in numerous museum and private collections across the country. Carter is currently represented by galleries in Miami and Detroit. She lives and works in New York City. 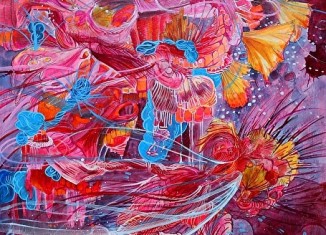 You’ll just have to
Work by Gina Occhiogrosso, 2013
Gouache and acrylic on paper, 41 x 56 inches 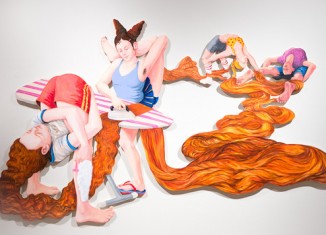