Erica Jong came of age during feminism’s second wave and played a pivotal part in broadening the movement’s critique and exploration of a wide range of cultural issues, including female sexuality, marriage and a woman’s role in her own destiny. In her first novel, Fear of Flying, Jong challenged quaint notions of femininity and female sexual appetite — the “zipless fuck” will forever be remembered as a liberating fantasy by many women as well as a rallying cry by many more. Jong’s fierce, frank twenty-something poet, Isadora Wing, dared to live out loud what many women at the time were unable to even admit to themselves. The book resonated immediately with millions of women looking to break out of the confines of the few acceptable roles being proffered in post-war America in the 70’s, namely those of the perfect wife, homemaker, and mother. Recognized as a seminal work of feminist fiction, Fear of Flying has sold over 27 million copies and been translated into over 40 languages.

Throughout her long and illustrious career, Jong has been a passionate advocate for women owning their power in the personal and political realm. This election season, Jong is reaching out to her friends, and their friends, asking them to get behind Hillary Clinton’s bid to be the next President of the United States and to do so in a very tangible way. She has written a letter of support to Hillary Clinton and asked them to sign it.

Garnet News had the opportunity to talk with Erica Jong recently about her fervent advocacy on behalf of Secretary Hillary Clinton.

Garnet News: Let’s start with last week’s presidential debate. What do you have to say about that?

Trump seemed like a toddler with a case of the “terrible twos.” He was having a melt-down. Completely unprepared, interrupted Hillary 70 times then claimed he had won the debate based on right-wing websites that are inaccurate.

Garnet News: Hillary is still getting an unfair rap in the press, especially on cable news. Why is that?

Plain and simple — it’s suspicion of women. For 30 years, the press has attacked Hillary without cause. Attacks stick — especially against women. This has been a witch-hunt from the start. Without history, young people don’t know how hard Hillary has worked for children and civil rights. Some have written to me with amazement after they read articles I wrote about her 20 years ago.

Garnet News: I recently saw Ava DuVernay’s powerful documentary, “The 13th,” about the constitutional amendment that abolished slavery in 1865… and so much more. The film, in fact, presents an abbreviated history of racial inequality in this country, connecting “yesterday’s America” to today’s. Donald Trump’s clarion call to Make America Great again seems designed to appeal to a nostalgia for a particular time in our past, prior to the Civil Rights movement. Describe for us the unimaginable: Trump’s America.

The most dangerous thing about Trump is his encouragement of violence against people of color and people who disagree with him politically. He has already encouraged Klan members, fascists of every stripe, sexists, women shamers and haters of every sort. He is a flagrant lawbreaker: he breaks tax laws, he breaks foundation rules. Just days ago, his foundation was stopped from soliciting contributions because it is not operating legally. He gives encouragement and coverage to every lawbreaker. If POTUS can do it, everyone will do it.

He’s an overt hater of Latinos and African Americans. He opens a Pandora’s box of bigotry.

His America would be one in which people are encouraged to use guns to silence those they disagree with and people who don’t look exactly like them.

We already have a plague of police violence against people of color. Imagine that hatred amplified by a leader with no sense of restraint.

It’s no surprise that racism and sexism still exist but when a candidate for president makes them seem kosher — all the vermin come out of the woodwork. We want a country that does not accept racism and sexism. We know that some people have violent impulses, but we cannot elect a leader who approves of violence.

We are on the long road to becoming a country that honors civil rights. We are not there yet. Trump would take us back to a very ugly and dangerous past.

Garnet News: Over the weekend, The New York Times revealed Trump’s 1995 tax returns. Can you tell us what trouble you think it means for Trump — his losing almost a billion dollars in a single year and paying no taxes for 18 years since?

He hasn’t gotten in enough trouble — but he will. His surrogates are spinning his tax cheating as good business. This is absurd. People who lose millions of dollars for investors, shut down casinos and hotels, should not be able to continue to stiff the public who suffers. Trump has failed to pay employees, sued people with no ability to hire lawyers, bullied his way into holding on to the wealth he has inherited. He is not a good businessman but rather a manipulator of debt. In the next month, we will learn more things that will bring the Trump empire down. This is only the beginning. Trump’s arrogance prevented him from seeing that a presidential run would open up his terrible history of cheating the public, making sex tapes, cheating on his wives. It’s all coming into the open now.

Garnet News: Do you have a favorite “Why I Support Hillary” article that you’ve seen in recent weeks?

My favorite article is the one I wrote for CNN Opinion, Why I Trust Hillary Clinton.

Around the time that the press was claiming Hillary was too sick and weak to be president, my friend Jill Schary Robinson and I were talking about the unfair way in which she is treated. We decided to craft this letter of support.

We started by sending it to writer friends like Joyce Carol Oates, people we know in show business like Bette Midler, people in the world of publishing like Muriel Fox and Jane Friedman of OR Media (my electronic publisher). The response was extraordinary. Many people reprinted the letter and sent it to their lists. Suddenly we had signatures from doctors, lawyers, psychiatrists, social workers, women from all walks of life. We were asked to create a letter for men and we have done so.

Garnet News: How many signatures do you have so far?

Currently, we have 2,214 signatures of women, with new ones pouring in every day.

Garnet News: What else can we do to change the conversation around Hillary given we have just over a month left?

My daughter and I are planning to go to Cleveland, Ohio to phone-bank with a group of very committed women of all ages. My abilities are to write and to speak, and I am trying to use them to show that Hillary’s history of supporting children, women’s rights and civil rights is unknown to many. Gore Vidal used to say we live in the United States of Amnesia. That is true.

Without history, we slip back into the past. Americans have never been very good at holding on to our own history. We are in love with the new, the trendy. We must remember how many people were killed over civil rights, women’s rights, LGBT rights. None of these things come for free. We have to keep fighting. “Women’s rights are human rights,” as Hillary Clinton famously said in Beijing in 1995. We can’t move forward if we don’t know our past.

It’s really upsetting that people go into the voting booth with grudges rather than with information. Information is power. Without information, we are in danger of becoming victims of oligarchs like Vladimir Putin or Kim Jong-Un, whom Trump adores. Both these dictators have endorsed him. Can you imagine a candidate who encourages hostile powers to hack our election? The formerly grand old party nominated him.

Here are the two letters to Hillary — the first is from women and the second, from men.

To add your signature to either letter, send an email to [email protected] with the subject title: “Hillary Letter.” Include your name in the body of the email. If you are signing the men’s letter, please specify “Men’s Hillary Letter” in the subject title. There is no need to copy and paste the whole letter in your email. You will receive a confirmation email within 72 hours letting you know that your name has been added to the list of signatures. The letter will be posted on Garnet News Facebook page with the signatures and will be updated daily.

We, too, recognize Hillary Clinton as one of the most prepared candidates ever to seek the office of the presidency, and we are equally impressed by her intelligence, commitment, and hard work. Our support of Hillary Clinton is unequivocal, and we hope that you will join us in helping her make history as America’s first female president.

Hilllary Clinton was a long time advocate for children and education. Had she been elected she would never have chosen someone like Betsy DeVos... GOP Senators have 11 days to get this verison of Trumpcare through the Senate.  Mitch McConnell is pushing his herd to pass the Cassidy-Graham... This Is What Dying Without Health Insurance Looks Like

In their first attempt to repeal and replace the Affordable Care Act, congressional Republicans sought to gut the Medicaid program by cutting $700 billion... 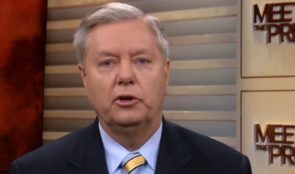 Lindsey Graham, Too Good To Be True President Trump has once again shown himself to be unfit to be a leader on the world stage. After the bombing of a London subway,... Anastasia Selby worked as a "wildland firefighter" for seven years in the 2000s. She knows her way around a fire, and she also knows...
Load more